In 1903 there were two hose houses in Veazie. One was located in the triangle at the foot of Oak and Olive Street. The other one was situated on Merrick Street approximately where the Earl Parks home is today. By the year 1927 the hose house was located in the old school building (where the present town hall is today). A large opening for a fire door was cut on one end of the building and a ramp was added to house the new fire truck Veazie had purchased a few years before. When the Town Hall was built in 1938, the plans included a bay for the fire truck. A new fire truck was purchased in the 1940's.

In November 1950, Veazie organized a volunteer fire department with twenty seven members. (Town population was six hundred people at that time) Twelve members had their hats and badges: more were outfitted later. The money was raised through town merchants and a fireman's dance. Training sessions consisted of weekly movies, speakers from the larger communities and actual practice with the town's equipment which included a five hundred gallon pumper on a Chevrolet chassis.

On May 14, 1968, the Veazie Fire Fighter Association was organized. This included seven experienced firemen. Today there are approximately eighteen members which include one chief, one assistant chief, one full time captain, three lieutenants, one full time fire fighter and eleven part-time. 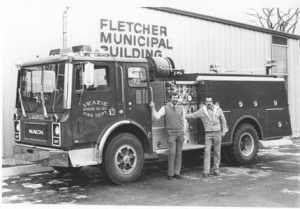 In 2002 the municipal building went under a "facelift" to transfer the bay doors from the sides of the building to the front of the building. A small bay was added which increased the number of bays from three to four. This additional bay houses Rescue 198, a 1998 Chevy Suburban.

The Veazie Fire Department is a paid combination fire department providing 24-hour coverage. The fire department responds to any emergency in town including medical calls. Veazie is licensed at the First Responder level and permitted to EMT-Intermediate. There is a firefighter on duty from 8a.m. to 5p.m. seven days a week. Currently there are 2 full-time firefighters that work a rotating shift and are responsible for daily maintenance and equipment checks, fire prevention activities, inspections, preplanning and emergency response.